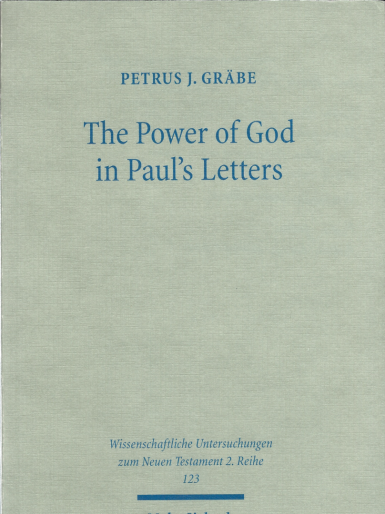 The concept of God's power is a leading motif in Pauline theology. It functions in key passages of Paul's letters and is intrinsically linked to his theology of the cross and its soteriological explication in the message of justification. Because the concept is so closely related to the message of the cross, Paul often speaks of "power" in a paradoxical context.

Petrus J. Gräbe investigates the concept of God's power in Paul's letters. He also gives an overview of God's power in the broader New Testament context in order to distinguish more clearly the specific Pauline interpretation of the power of God.

"The work is an important contribution to Pauline studies and is a well-researched, thorough, and scholarly study." Jeffrey R. Asher in The Catholic Biblical Quarterly vol. 64. (2002), p. 762

God is powerful.
Pauline theology is shaped by the powerlessness of the Crucified. Saul was offended by the shame of Golgotha. As apostle he, however, did not evade this shame, because God raised this Jesus, who had to die a cursed death and revealed in him that the apostle would preach Jesus to all peoples as God’s saving word.
God is powerful.
His word reaches the ends of the earth: Educated and uneducated, Greeks and barbarians, Jews and heathen, slaves and free people, men and women. God’s gospel has the power to save human lives; a power that becomes a reality through human beings, who proclaim the faith and who are trustworthy themselves, because they know they have been sent by God and remain faithful to this mission with all their power, limited though it may be.
God is powerful.
His power is made perfect in weakness. God’s power must lead people in all their wisdom, in their desire to live, in all their strength to the limits of their existence and beyond, in order to bestow on them the fullness of his grace.
God is love.
The statement from the First Letter of John (1 John 4,8.16) is most relevant to Paul: God has love because he is love. If his love were only a positive attitude, it could not have established hope. Only when the One who is all-loving is also all-powerful, to state it in traditional terms, can guilt and death be forgiven and overcome.

Petrus Gräbe wrote a monograph, devoted to the theme of God’s power in the letters of Paul. He also gave an overview of the remaining Corpus Paulinum and the two writings of Luke (the Gospel and Acts). He focused, however, on the main letters of Paul to the Corinthians and to the Romans. As a good exegete, who understands his trade, he finds his point of departure in the text and in the most certain and important instances in which the concept of power occurs. From the beginning, however, he is aware of the explosive force of his study: Paul the messenger of the cross – would he support a theology of power? The Christ-devoted apostle – would he contribute substantially to the discourse about God? The missionary of “agape” – would he render homage to “power”?
Petrus Gräbe sheds light on these questions. He succeeded in his monograph to forge several links.
The emergence of this dissertation linked his South African home country with the academic scene in Germany; the second edition reaches over the Atlantic: from North America to Europe and back. This is very significant for Pauline research, which has to find between sociological and anthropological, science of religions and theological models of interpretation a way to interconfessional, interdisciplinary and intercontinental understanding. Karl Kertelge and Ferdinand Hahn, Graham Stanton and Christopher Rowland, Alexander Wedderburn and Jörg Frey have all contributed to this study. Andrie du Toit suggested the theme and was supervisor for this doctoral dissertation. In Pretoria lie the roots; Münster and Munich were places of study and research, enabled by scholarships from the German Academic Exchange Service (DAAD). Virginia Beach is the present field of activity of this teacher and researcher.
The book connects exegesis and hermeneutics. Textual analysis forms the basis; the goal is theological exploration. The author explores three essential dimensions of meaning: the theological-christological, the pneumatological and the ecclesiological – in this significant order.
Petrus Gräbe has not only shed light on exegetical issues in this study, but it also has a significant ecumenical dimension. He does not deny his formation through Reformed traditions; the encounter with Catholic theology at the University of Münster inspired him; his sympathy with the Pentecostal movement led him to understand ecclesiology from the perspective of the theology of the Apostle, which realizes itself in “a demonstration of the Spirit’s power” ( 1 Cor 2,4, NIV).

Rigorous exegesis becomes biblical theology. To understand God’s power in light of the death and resurrection of Jesus from the blowing of the Spirit, as Paul presents it, is basic Trinitarian theology. With this thesis ends Petrus Gräbe’s dissertation and begins a new round of conversation about the power of love, the work of the Spirit and God’s intention of universal salvation in Jesus Christ.